I had been a fairly athletic child. I involved myself in sports such as water skiing and gymnastics and had noticed that I was somewhat strong. You never realize what your strength may be needed for in the future, but it is a great foundation to start with. I found out shortly after my 1st husband and I were married that I would need that strength to carry my husband; literally. Young and energetic about life we were married and knew that life was full of opportunity. Then disaster struck and Jim was diagnosed with a brain tumor at age 24. Long story short, he had surgery to remove it and it left him disabled.  It took him a year to relearn how to walk and coordination and speech are items he still works on until this day.  I stuck with him and supported him emotionally, financially, and physically. 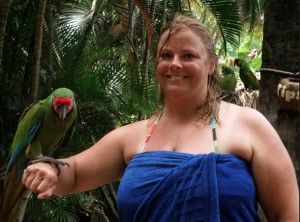 During this tragic time I used food to cope. It was literally my ONLY pleasure. I think I had a love affair with the local mexican restaurant and their Ultimate Nachos! Brownies and cookies were my friend too. My once somewhat athletic body shifted to an obese body, topped with pregnancy and stretch marks. Looking in the mirror only made me more depressed and led me to eat more. This was the start of a vicious cycle of bingeing and dieting.

I had always had a fascination with the women bodybuilders from the 1980/90s. I had poured through muscle magazines in the early 1990s and thought maybe one day I could compete. I never really believed I could do it until I made a change back in 2000 when I read the book Body for Life. Believe it or not, I lost 100 pounds and competed in amateur bodybuilding after a year and a half of training.* I set out to win the Colorado State Title. It took me 3 years to do it and I got the Colorado State Bodybuilding Championship ring… a dream come true! Little did I know that I would not be able to maintain my physique.

Through an excruciating back injury that kept me out of the gym and having to cope with my hubby’s disability needs, I used excuses to not exercise and to eat poorly. My weight ballooned to 255 lbs on this 5′ 6″ frame. It shames me to admit I was even considering gastric bypass! I managed to get my back problem fixed with a surgical procedure.  I gradually got back to the gym and managed to gradually reduce the quantity of food I was eating and lose 50 pounds over the course of 2 years. * I was VERY happy that I didn’t do it too fast as was able to modify lifestyle choices permanently. Then I was poking around on bodybuilding dot com and saw the 100K Dymatize challenge! I upped my game and started working harder in the gym and eating with more discipline. I finished the challenge so proud of my accomplishment! It was then that a bodybuilding friend mentioned an upcoming natural bodybuilding show in just three weeks from my after picture date! 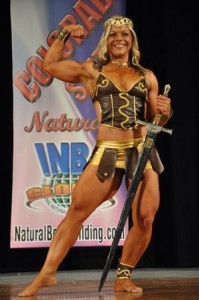 I decided it was time to make a comeback and compete again. Ten years from my last Colorado State victory, I took the Colorado state bodybuilding title again! I surely did not expect to win the title after just getting back into the sport.

Since this time life has twisted and turned with my 1st husband and I amicably deciding to pursue our own paths.  I have stayed true to my goals and have competed as a Pro in the 2014 INBA/PNBA Team USA placing 2nd in the nation and the 2014 Pro Natural Olympia placing 4th in the world.  More recently I have met a WONDERFUL man and we got married on March 30, 2017!  Since then I’ve placed 2nd in the NPC Patriot’s Challenge in Women’s Physique and plan on competing in the NPC USA Nationals on June 28 and 29 of 2017.

*Note: Results may vary from person to person.

Theme by Anders Noren — Up ↑